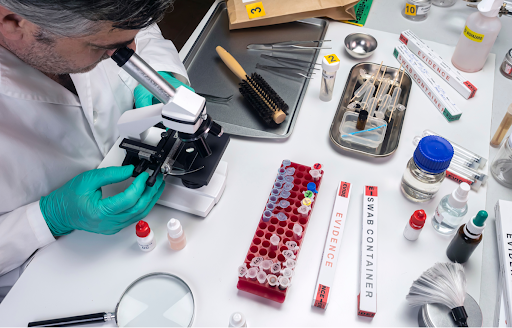 The Role of Polarized Light Microscopy in Trace Evidence Analysis

For more than a century, advanced microscopy techniques have aided criminal investigators in determining the events of a crime and pinpointing a suspect. One of the most popular forensic microscopy techniques used in analyzing trace evidence includes the use of polarized light. Polarized light microscopy (PLM) enables scientists to detect and identify unique details in small pieces of evidence, such as clothing fibers, hair, glass, and soil. This evidence can then be included in the investigation report to link a suspect to a crime or determine where a victim was before their body was deposited elsewhere.

What Is Polarized Light Microscopy?

Polarized light microscopes make use of properties of light and the objects it illuminates to identify and characterize trace evidence found at crime scenes. First, let’s think about polarized sunglasses and sun glare. Light easily scatters off objects, and this scatter is visualized as glare. Polarized sunglasses (linear polarizers, or just “polarizers”) remove most of the scattered light, allowing light coming from one plane ( ׀ vs ?) to pass through. This allows you to see without glare.

PLM also uses a linear polarizer to send light moving in just one plane to the sample. PLM then adds a second linear polarizer (“analyzer”) on the other side of the sample that, like the first polarizer, blocks light in all but one direction; however, the orientation is perpendicular to the first polarizer (׀ plus —). You can see this phenomenon for yourself by taking 2 pairs of polarized sunglasses, looking through one pair, and rotating the second pair in front of the first — the view will turn almost completely black when the lenses of the two sunglasses are at 90° to each other. This phenomenon is called extinction.

In PLM, objects between the polarizer and analyzer can distort the light, allowing some of it to change its orientation and allowing some to pass through the second polarizer. This distortion is seen as colors and may provide clues to the composition of the object. PLM is a quick method for screening materials in the initial stages of an investigation. The microscopy technique can then be paired with other types of instrumentation to develop the criminal case.

How Polarized Light Microscopes Aid the Examination of Trace Evidence

PLM is most commonly used microscopy technique to positively identify trace evidence. These particles can range from glass shards, fibers, and paint chips to hair, plant matter and food stains, to explosive residues and gunshot particles. Most forensic laboratories have polarized light microscopes for their extreme versatility, enabling scientists to examine a variety of samples.

Due in part to the magnification range of microscopes, the use of PLM techniques during trace evidence analysis also allows the observation of very small particles. Even if only a single fiber or small amount of residue was recovered from the scene, suspect, or victim, trace analysts could get a wealth of information from that sample. Most microscope tests are non-destructive, preserving the original condition of the fiber, hair, or residue and allowing for further/repeat analysis at later times or using other techniques.

Finally, using PLM to examine trace evidence can point law enforcement in the right direction, saving them time and money and enabling them to use their resources more efficiently.

As trace evidence analysis is a discipline of forensic science that deals with samples that are not visible to the naked eye, specialized microscope techniques are needed to gain crucial information. Polarized light microscopes can help analysts examine the following types of trace evidence:

Enhance Your Observations with Microscopes From UNITRON